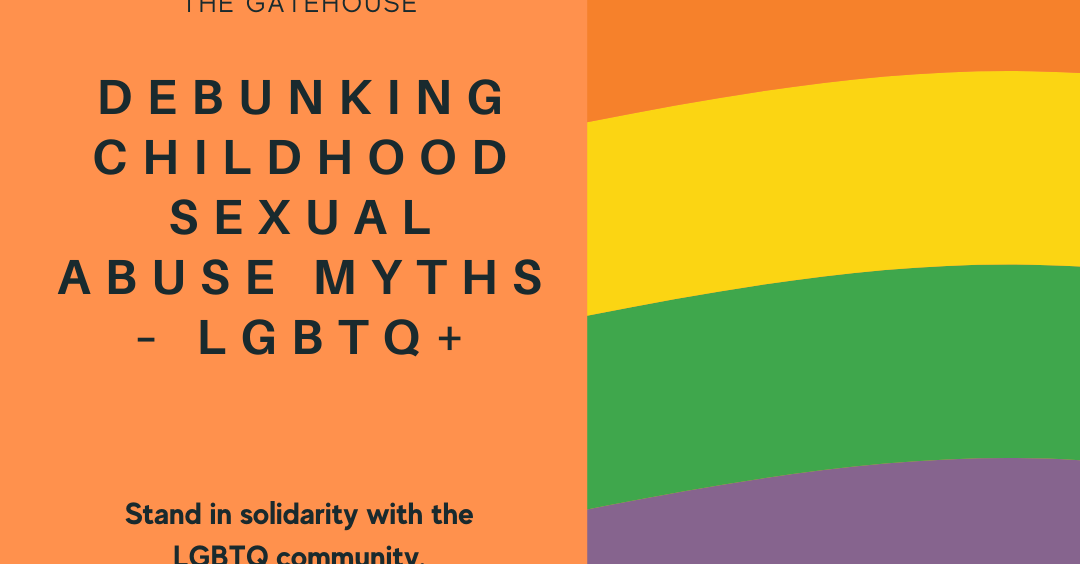 There are many myths surrounding childhood sexual abuse, including myths involving gender expression, sexual orientation, and potential offending behaviours. It is important to note that myths about CSA trauma further perpetuate survivors’ silence, shame, and guilt. Myths have the power to silence and further re-victimize survivors of childhood sexual abuse. It is imperative that as a healing community, we debunk myths by educating the public on the facts and truth regarding CSA survivors from many different communities, cultures, and faiths, including the LGBTQ+ community.

The myths contained in this article are not an exhaustive list of myths pertaining to the LGBTQ+ community. As an LGBTQ+ ally, it is important to educate yourself on the various experiences of LGBTQ+ survivors. A more comprehensive list is included in both sources for this article.

FACT: According to the American Psychological Association, children are not more likely to be molested by LGBT parents or their LGBT friends or acquaintances. Gregory Herek, a professor at the University of California, Davis, who is one of the nation’s leading researchers on prejudice against sexual minorities, reviewed a series of studies and found no evidence that gay men molest children at higher rates than heterosexual men (Southern Poverty Law Center, 2021).

FACT: No legitimate research has demonstrated that same-sex couples are any more or any less harmful to children than heterosexual couples.

MYTH# 3: Being raised by gay parents will cause kids to be gay.

MYTH # 4: People become homosexual because they were sexually abused as children or there was a deficiency in sex-role modeling by their parents.

FACT: No scientifically sound study has definitively linked sexual orientation or identity with parental role-modeling or childhood sexual abuse (Southern Poverty Law Center, 2021). The American Psychiatric Association noted in a 2000 fact sheet available on the Association of Gay and Lesbian Psychiatrists, that dealing with gay, lesbian, and bisexual issues, that sexual abuse does not appear to be any more prevalent among children who grow up and identify as gay, lesbian, or bisexual than in children who grow up and identify as heterosexual (Southern Poverty Law Center, 2021).

Adoptions From The Heart. (2019). Debunking myths about LGBTQ parents. Retrieved from https://afth.org/debunking-myths-about-lgbtq-parents/