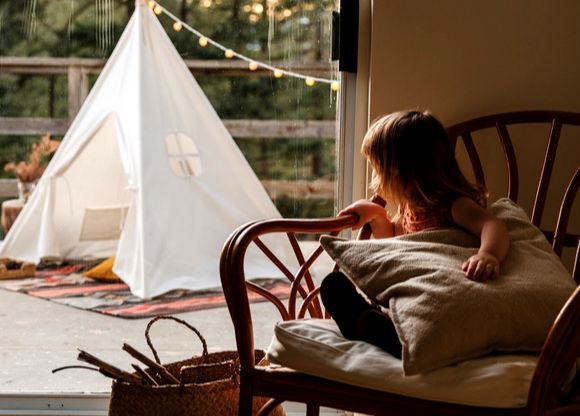 Trigger Warning: The following story contains sensitive and potentially triggering details pertaining to experiences of childhood sexual assault. Names in the following lived experience story have been changed to protect those impacted by this trauma.

Samantha was 4 years old when her babysitter of 14 and her babysitters’ friend asked her to go into the tent which was set up in the backyard. Samantha was thrilled to be invited to hang out with the big girls. When they asked her to engage in oral sex, Samantha never questioned it. She thought it was a new game. After all, how much does a 4 year old know about sex? Samantha had never been educated about boundaries or inappropriate touching. Samantha says she can still see the images in her head of what happened that day. She also recalls that the tent was canvas and had at least 4 people inside. This was the start of a trauma that would impact that 4-year-old girl for the rest of her life.

As a middle-aged adult, Samantha can recall the encounter in the tent. She also says that she had thought that her older brother must have also been abused. He and his friends used her for sexual gratification, which she recalls started at age 10. Samantha explains that she put a stop to it when she was around 13 years old by threatening to tell the police. He continued to visit her at night and stand in her doorway staring at her. She would wake and he would be standing there exposing himself and pleasuring himself. Once again she had to threaten legal action for this to stop.

Even though Samantha knows that she had been abused from age 4 until 13 she can not recall anything from age 5 – 10 years. She has a 5-year gap in her memory. It’s very common for survivors like Samantha to have memory gaps for all or part of their abuse. Psychologists call this dissociative amnesia. This type of mental disorder involves the inability to recall important information which is significant enough for a healthy brain to recall. It is believed to be her brain’s way of protecting her from what must have been devastating. Samantha was advised by her older brother that it was during that time that they were both abused by their babysitter and from that point on it was like an addiction for him with an unlimited supply. Samantha was the supply.

Now in her mid 40’s she looks back and says that she can not recall ever sleeping fully through the night. Her reality has been waking up 2-6 times a night. Samantha has also had a hard time managing everyday stressors and can easily become anxious. Her anxiety causes her to feel like she is being choked; her muscles in her hips, legs, and neck tighten up and she grinds her teeth when she sleeps. She has nightmares and wakes in a cold sweat. She is embarrassed and ashamed by the unpleasant thoughts which uncontrollably haunt her mind. She makes attempts to think about different things but her body keeps telling her she is in danger. A sudden stare from a stranger, the sight of a tent or even a smell can set her inner alarm off which can take days to disarm.

Samantha has been diagnosed with Complex PTSD. Many people don’t understand that PTSD is more of an injury than a mental illness. The injury occurs in the nervous system and causes dysregulation of the amygdala, the part of the brain which sends warning signals when one is in danger; triggering a fight or flight reaction. Someone with Complex PTSD has the symptoms of PTSD with some additional symptoms such as emotional dysregulation and severe problems trusting. Self-esteem is also impacted. It is likely that Samantha has suffered with this for years. She simply can not recall ever feeling “normal”.

While already off work for stress, she found out that she had C-PTSD resulting from numerous prolonged childhood traumas. She advised her employer on a Friday and the following Tuesday she received word that she would not have a job to go back to as her department had been restructured and her position no longer existed.

Samantha did not get PTSD from a high risk job. There is no pension benefit for her injury or WSIB to help her heal and her employer’s disability plan will stop payments after 2 years, leaving her with no income at all. With no job she no longer had the health benefits to pay for therapy and no hope of a job to go back to. Her only hope is to find healing so she can be strong enough to return to work and design a better future.

We don’t know what the future holds for Samantha but we do know that she is presently enrolled in one of the peer support groups at The Gatehouse, where she will find others just like her. Together these women will learn the skills they need to manage the daily challenges of living with the impact of childhood sexual abuse. They will help each other to open up about the trauma and confront some of the hard issues. She will have a sense of community and safety as she develops skills, new relationships, and transitions her trauma story from a place of fear and shame to a place of self-compassion and courage; equipping her to move forward and leaving her past behind.

The Gatehouse can only help people like Samantha with the generosity of our donors. We will not charge Samantha for the trauma program we provide; she has already paid a big enough price.

Every donation makes healing for people like Samantha possible. $20 per month can make all the difference.

Please consider making a donation to help The Gatehouse

The Gatehouse, a community based charitable organization that provides much-needed support, resources, and community to survivors of childhood sexual abuse. Survivors of sexual abuse are in desperate need of our support and services and The Gatehouse relies on the generosity of individuals, foundations, and businesses to fund and expand our creative programs including peer support groups, art therapy, wellness workshops, conferences, and the investigation support program.

You can donate one time or donate monthly. Your donation helps to transform the lives of those victimized by childhood sexual abuse.

Use the form below donate. Thank you for your support.